Good morning Ladies and Gentlemen! We have an annoucement on the Warhammer community page. The Varagyr terminators are inbound. Only one pic so far but from what I’m seeing the guys look pretty darn bad ass!

That’s right our next recording session is here! IF you have any suggestions or requests please drop us a line! We’ve got a couple topics in mind including some Hobby Tips as wells as some more Meta related discussions. Thanks for listening!

OH boy. The new Horus Heresy rule book pre-order has been delayed due to “Quality Control” issues. I personally don’t mind. I’d rather have it come out right than come out broken. I have already had one red book fall apart upon opening the shrink wrap direct from Forge World. Now to their credit they expressed out a replacement, but still who wants to go through that hassle? Let hope it gets fixed fast and we can say goodbye to Invisibility!

Good morning. Episode 3 should be up some time this weekend. Will be finishing editing tonight and submitting to the network for publishing.  Been working on my Apothecarion Detachment this week. Need to start hitting the details. Any kindly advise on hitting all those crazy small equipment details? Post and let us know!

Now no hate here, but I’m not exactly thrilled with the look of the new Orion Drop Ship. I mean it looks cool(and here it comes) but it looks like a Modified Tau devilfish. I mean did dome custodes get Mutated in the warp, crash land on a planet and evolve into the Tau race? Wow now that would be a spin! Fan fic here we come! 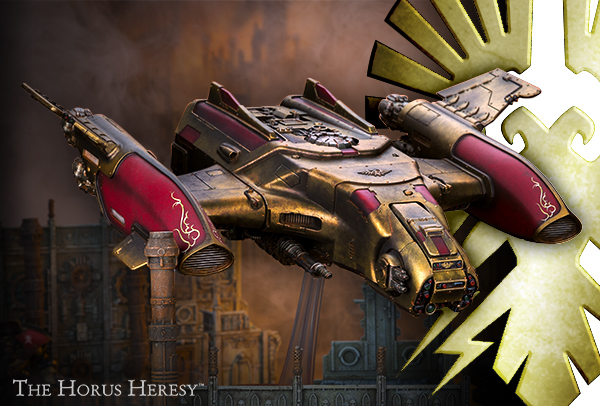 Well as always Ryan and Nick put on a great event. It was a 2 game 3000pt event. Each side’s general appointed mission and special objective based on table and opponent. Multiple lists were allowed and multi-bombing a must!

I of course took my Ultramarines, which were not full painted due to a LITERAL paint booth meltdown. First game was a team game 3000pts of Ultras and my teammate Chris’ 1000 pts of Sallies versus 3000 pts of Iron Warrios and 1000pts of Nightlords. First turn was great, and we should have know better when down hill from there. G-man did not even get in the mix. Lessons learn be careful what units you screen with. Also I did Seize initiative so that was kewl.

Game 2 was an awesome grudge match. Dave Challenged me Alpha and Omega, Primarch on Primarch. So the Pride of the Legion Hosts went at it. I again stole initiative! That’s twice in one day. I have never done that before nor do I expect to again!I suffered some devastating losses turn 1 but fought back. The two Sicarans made their presence felt! Dave had to get objectives while I needed to hold center of the board, but it came down to a game of attrition, Rhinos popping left and right. Dave’s Venator and my Land raider both got popped early. The Sicarans chipped away at both infantry and Dave Spartan while my Spartan rolled into position. Guilliman and the Suzerains with Apothacary jumped out to get ready to assault, which is when Dave turned around his Rhino and popped my guys with some plasma! Then The couple remaining Suzerains and GMan got assaulted by Alpharius and his termies. I hung in there a couple rounds but in the end Guilliman but the bullet. But next turn so did Alpharius and his boys. I had him on the run but sure enough turn 5 I rolled and the game ended. Was an AWESOME match and definitely one of the best time I have had playing Horus Heresy. I think both of us learned a lot about our lists.

I can say one thing for sure. The primarchs will hit the table again!

Like those gold plated punks needed more toys! But as usual the MOdels look amazing. Let’s hope I get to see some fully painted on the table soon by a member of our gaming group who will not be named (TOM).

Pride of the Legion
Blog at WordPress.com.